Can Christianity survive in its birthplace?

30 Nov Can Christianity survive in its birthplace?

Posted at 22:35h in Blog by Gary Frazier 0 Comments
Share 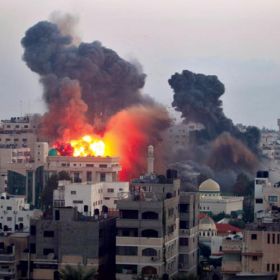 With a tenuous peace in the Middle East, some wonder what is the future for Christians in the region. CNS photo

It is very difficult to make sense of the latest violence in the Middle East. And as we embark on another Advent season, it makes one wonder about the long-term viability of Christian communities in the Church’s birthplace in the Middle East, whether Palestine, Israel, Syria, Iraq or elsewhere in the region.

There has been so much death and destruction in recent months during the civil war in Syria and the war between Hamas in Gaza and Israel. Rightly, the world is focused on this, especially the senseless deaths of innocent victims, many of them children.

But often overlooked (and caught in the crossfire of politics and war) are Christians, some of the oldest Christian communities in the world. They are finding themselves marginalized. Many of us here in Canada know Christians who have fled the Middle East for the freedom of our country. And one can hardly blame them when we see:

Throughout history, Christian communities have survived in the Middle East despite great hardships. For example, the Turks, who ruled much of the region for 400 years until the First World War, relegated Christians to formal second-class citizen status with special taxes and restrictions on interactions with Muslims.

But today things feel different. Could it be because of Hamas and the rising power of the Muslim Brotherhood, its parent organization, in the Middle East? All one needs to do is read the Hamas Charter, called the Covenant of the Islamic Resistance Movement, to get a chill down one’s back. It clearly states Israel must be extinguished and Jews killed, followed by other non-Muslims. Its Article Thirteen is particularly unnerving because there is no peaceful compromise for Hamas: “There is no solution for the Palestinian question except through jihad. Initiatives, proposals and international conferences are all a waste of time and vain endeavors. The Palestinian people know better than to consent to having their future, rights and fate toyed with.”

Yunis Al-Astal, a cleric and Hamas member of the Palestinian Legislative Council, removed any doubt about where Hamas stood on peace in a famous sermon he gave a couple years after Israel pulled out of Gaza in 2007: “Very soon, Allah willing, Rome will be conquered, just like Constantinople was, as was prophesized by our Prophet Muhammad. Today, Rome is the capital of the Catholics, or the Crusader capital, which has declared its hostility to Islam, and has planted the brothers of apes and pigs in Palestine in order to prevent the reawakening of Islam — this capital of theirs will be an advanced post for the Islamic conquests, which will spread through Europe in its entirety, and then will turn to the two Americas, and even Eastern Europe.”

All this makes one wonder how long this ceasefire — which was negotiated with help from Egyptian President Mohamed Morsi, once a leading figure in the Muslim Brotherhood — will last between Hamas and Israel. So much is riding on the ceasefire as a path to peace, including the long-term survival of Christian communities in the region.

When asked by Pilate if He were a king, Jesus replied: “My kingdom is not of this world” (John 18:36). Then Jesus submitted to the brutal torture and excruciating death to prove to the world that violence begetting violence begetting violence is not the answer. We can only hope and pray, as we prepare in this Advent season to celebrate the birth of the Prince of Peace, that the politicians in the Middle East and world leaders finally come to the same conclusion.