Posted at 22:31h in Blog by Gary Frazier 0 Comments
Share

Boeing has successfully tested an EMP missile that could be doomsday for Iran; media have largely ignored the development. 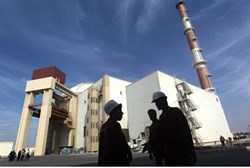 Boeing has successful tested an electro-magnetic pulse (EMP) missile that turns “science fiction into science fact” and could be the doomsday weapon against Iran, but media have largely ignored the development.
The U.S. Air Force and Boeing demonstrated the device more than two months ago over a military site in the Utah desert, reported the VR-Zonetechnology website.
Boeing did not keep the test a secret, but most mainstream media and technology sites overlooked the report.
The test was codenamed CHAMP — Counter-Electronics High Power AdvancedMissile Project and was the first time a real EMP missile has been tested with positive real world results.
One of the most startling developments in the research and test is that the missile system does not use any explosives, thereby limiting damage to its intended goal of directing microwave energy that can cause instant blackouts.
Keith Coleman, who serves as Boeing’s CHAMP program manager in their Phantom Works division, stated that video camera showed “images of numerous desktop computers running, and then suddenly all of them go out quickly followed by the camera going to black,” VR-Zone reported. “We hit every target we wanted to…  Today we made science fiction, science fact,” said Coleman.  An Arutz Sheva opinion article in August mentioned Israel’s possible use of an EMP bomb against Iran. The report triggered a chain reaction, allegedly influencing U.S. intelligence sources who have since been quoted in several publications with doubtful assumptions that the article reflected Israel government thinking.
The London Times subsequently reported that an EMP bomb could cripple Iran by shutting down its electronics and sending the Islamic Republic “back to the Stone Age.” EMP causes non-lethal gamma energy to react with the magnetic field and produces a powerful electromagnetic shock wave that can destroy electronic devices, especially those used in Iran’s nuclear plants.
The shock wave would knock out Iran’s power grid and communications systems for transport and financial services, leading to economic collapse.