The President Bails out on Israel!

31 Aug The President Bails out on Israel!

Posted at 00:54h in Blog by Gary Frazier 0 Comments
Share

U.S. to Israel: If You Attack, We Don’t Have Your Back

General Martin Dempsey: “I don’t want to be complicit” if Israel chooses to attack Iran. 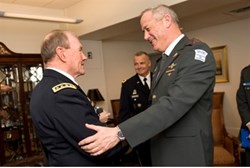 The U.S. military’s top officer made statements Thursday which appear to warn Israel that it should not expect U.S. assistance if it chooses to attack Iran’s nuclear weapons program. Chairman of the Joint Chiefs of Staff, General Martin Dempsey, said such an attack would “clearly delay but probably not destroy Iran’s nuclear program,” The Guardian reported Thursday. He added: “I don’t want to be complicit if they [Israel] choose to do it.” Dempsey said he did not know Iran’s nuclear intentions, since intelligence does not reveal intentions. What was clear, he said, was that the “international coalition” applying pressure on Iran “could be undone if [Iran] was attacked prematurely”. The White House said on Thursday that Iran has a limited window of time to accept the West’s conditions regarding its nuclear weapons program. White House Press Secretary Jay Carney told reporters the U.S. is “closely studying” the UN International Atomic Energy Agency’s (IAEA) quarterly report on Iran, “but broadly speaking it is not surprising that Iran is continuing to violate its obligations.” “As the report illustrates,” he added, “we are in a position to closely observe Iran’s program.” Carney said the US has told Iran that “The window of opportunity to resolve this remains open … but it will not remain open indefinitely.” Iran has increased its uranium enrichment capacity by at least 30% in the last four months, according to the IAEA report. It has doubled production capacity at the Fordo nuclear site, the report says.