Posted at 01:03h in Blog by Gary Frazier 0 Comments
Share

It seems the current President has forgotten that our Founders were very specific in creating 3 branches of the Federal Government. Let’s review: the Executive branch, ie the White House; the Congressional branch, i.e. the Congress and lastly, the Judicial branch. The Founders knew it would be very dangerous to our freedom if any one branch took more power than it was allocated. Enter Mr. Obama, supposedly a Constitutional expert, and yet he continuously ignores the division of power set in place by the very document he is supposedly an expert on. He not only instructed his Attorney General, Eric Holder, to not enforce the law passed by Congress as the Defense of Marriage Act, but has now done another end run around Congress by removing the work requirement from the Welfare Act passed in 1996 under the Clinton administration. Has this man no shame? Is he willfully ignorant of the Law or is he just ignorant? What about the American people? Are we ignorant as well and are we willing to allow this to continue to happen? We better step up and decide if this piece of paper called the Constitution of these United States means anything and if it does, then we must act!

I encourage you to make certain you are registered to vote and join me on November 6 as we throw this law breaking Bum out! I don’t know about you but I have had enough! 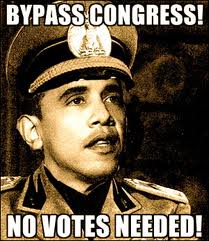